We recently pointed out that the war on terroir is just beginning. The major drinks industry players are suggesting already that terroir cannot possibly exist in a spirit. Their latest intellectual attack is to refer to a 16th century comedy drinking song; this defines the UK’s largest, most modern, single malt distiller’s understanding of terroir.

Diageo’s Head of Whisky Outreach revealed in an Imbibe article on terroir: “I have to remind them [trainees] how destructive the distillation process is. The distillation process itself is all about destroying many of the characters that you thought would define terroir. I try to remind people of the famous folk song John Barleycorn is Dead, which is an allegory of the beer-making process and is about the murder of John Barleycorn. They describe verse by verse what happens to this poor thing in order to make beer. In distilling we kill him again, if not twice more, so it’s brutal murder. So all that terroir stuff can’t get through the process.”

Destroying, destructive, murder of all that terroir stuff.

The reality is an industry that seeks conformity and standardisation simply has to undermine the concept of terroir in whisky for fear of more enlightened consumers asking awkward questions. It is the inconvenient truth that must be destroyed.

“THERE ARE SEVERAL DEFINITIONS OF TERROIR, AND EVEN DEDICATED TERROIRISTS DON’T ALWAYS AGREE, BUT TO ME, IT’S THERE IF YOU LET IT BE THERE, AND IT ISN’T IF YOU DON’T. BUT KILLING SOMETHING WILL NOT ALLOW YOU TO CLAIM THAT IT DID NOT EXIST…”

DO ALL SPIRITS TASTE THE SAME?

The distilling process is apparently destructive of terroir character, eh? Eau de vie, the clear, un-aged alcohol, is distilled from a single type of fruit, such as pear, raspberry, cherry etc. The fruit is mashed up, fermented and distilled to produce a spirit bursting with the flavour of… er, pears, raspberries, cherries. The spirit’s flavour is extracted only from the fruit. It tastes of pear because it is distilled from pear. Fermentation and distillation don’t prevent the character coming through.

It follows that a new spirit’s flavour is influenced by the original source material otherwise all spirit would pretty much taste the same. Single malt whisky’s flavour, what differentiates it from a Bourbon (maize), Rye (rye), Cognac (grape), Rum (cane), or Calvados (apple), is derived from barley. We use barley over corn because barley provides the highest level of flavour and we are fortunate it grows best in our climate.

And, like any plant, barley responds differently to where and how it is grown which can impact on the complexity of flavour. If one is prepared to look for it, that is, something the commercially incentivised tend to ignore, preferring to look the other way: for them it’s about yields and prices, not flavour or style. 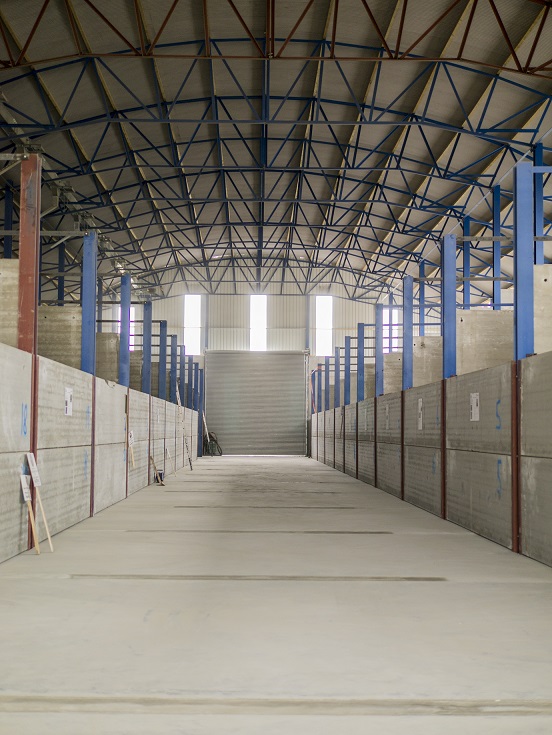 OUR CATHEDRAL OF BARLEY – WHICH KEEPS EACH OF OUR GROWER’S GRAIN SEPARATE.

According to Diageo’s Nick Morgan, the destructive processes that prevent terroir character include harvesting, storage, malting, milling, fermenting and distilling.

Sure, the barley has to be cut down – by a combine harvester these days, it would be pretty hard to do anything otherwise. The field-damp, green grain must then be dried after harvest or it’ll rot.

The Cathedral, our dedicated barley storage facility at Kilkenny, centrally located to our barley farms, is key to our logistics. Here the immediate drying and storage of each farm’s harvest is possible as it arrives off the field to be stored into its own dedicated bin to ensure the complete integrity of our supply.

After several month’s dormancy, it can be malted, the process of tricking the grain into germination, to enable fermentation. Malting is merely a cycle of water saturation and air desiccation, nothing destructive here merely replicating spring showers to encourage germination of the grain. Being the dedicated user of one of Athy’s Boby maltings, the whole malting process is adapted to each harvest for the whole year – without any enzyme additives – a uniform setting for the whole harvest removes variables. Oily, phenolic-rich peat smoke used to be used – and still is in places – for this grain drying which imparts it’s distinctive peat-reak right through to the spirit. It doesn’t get destroyed in distillation either.

Milling – appears aggressive – grinding the grain in our hydromill to a grist which immediately allows hot water access to the starch and pre-sugars contained within, activating the natural enzymes that create the fermentable sugars. Then we have to separate the sweetened water (wort) from the grain debris (draff). 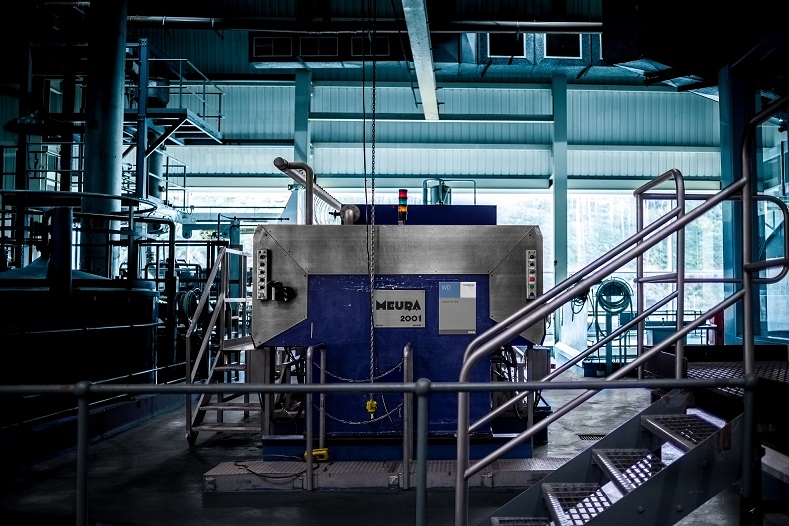 MEURA MASH FILTER – RARE TO SEE IN A DISTILLERY. WE USE IT TO EXTRACT MAXIMUM FLAVOUR FROM EACH DISTINCT TERROIR.

Our secret weapon is a mash filter as opposed to the traditional percolation of a mash tun. It’s a series of small pneumatic filtration plates in sequence which is particularly efficient at extracting every last drop of wort. It is thus our ‘terroir extractor’ par excellence. So hot water and filtration. That’s mashing for you.

Fermentation, the addition of yeast to munch on those sugars thereby creating alcohol is hardly a violent process either. Indeed, it is the very terroir fixer. It is here that those flavour compounds, essentially the esters and aldehyde groups are created by the barley/yeast interaction, and are ready to be distilled.

If, instead of barley we chose to distil rye, wheat, apples, pears, cane, grapes – would we get single malt whisky flavour?

The answer is clearly no.

Barley’s wide range of flavours determines the extraordinary complexity of single malt whisky. Where and how that barley is grown impacts on the level of flavours – think of it as a graphic equaliser – with variable levels of each compound, depending on microclimate, soil, topography – terroir – assuming its origin is kept apart from field to bottle. Nosing the wash, the fermented ‘wort’, a sour ‘beer’ of about 8% ABV, is where the first signs of terroir effect can be noted. 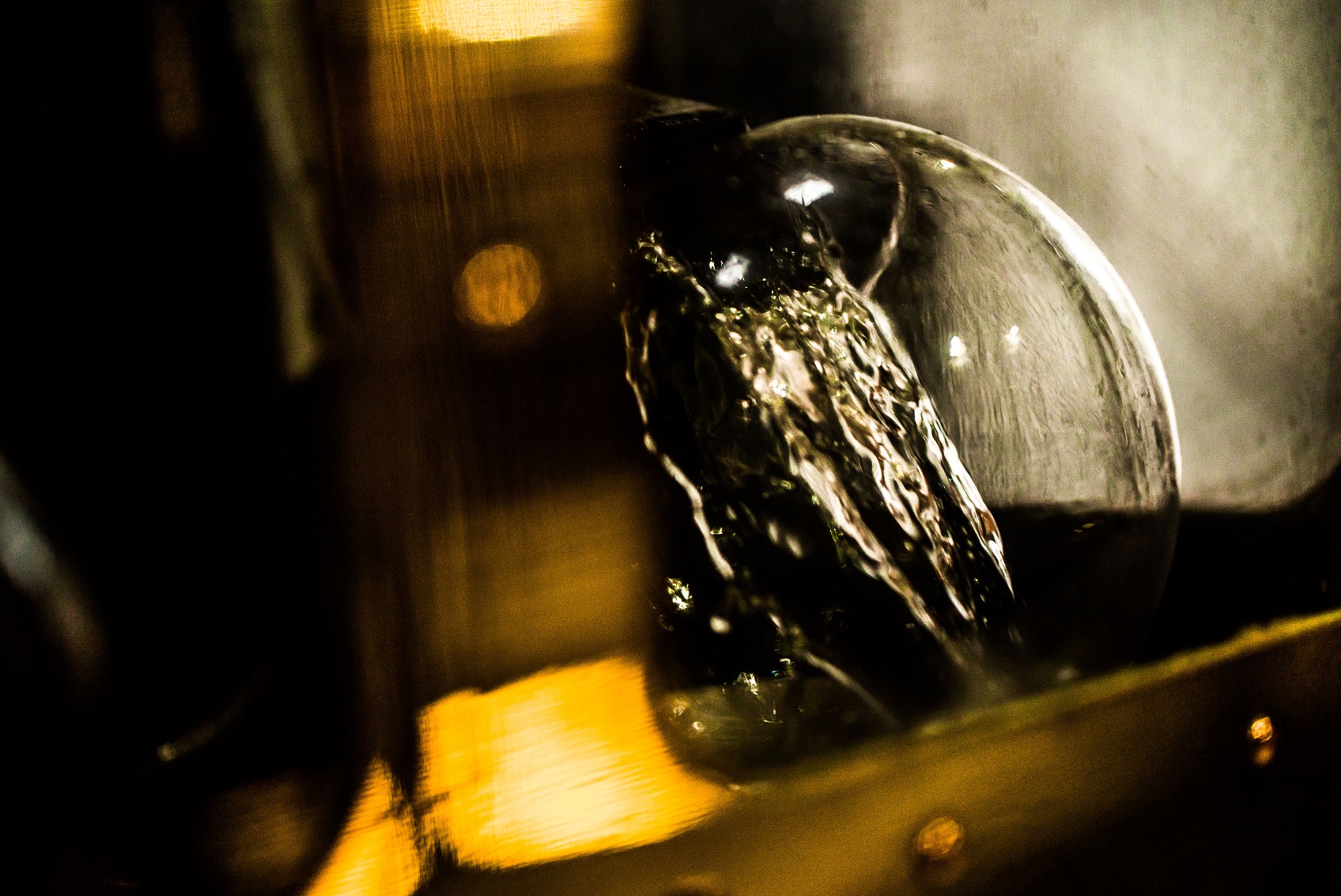 SPIRIT FLOWING THROUGH OUR SPIRIT SAFE.

Distillation separates the 8% alcohol from the 92% water by the application of steam in the still. It works on the simple premise that alcohol has a lower boiling point (@+/- 75c) than water, so as the temperature rises in the still, the alcohol evaporates away before the water does, as any sauce cook can observe.

There are three fractions over different boiling point ranges: the heads (foreshots) at the lower range – the dangerous methanol, acetone and ethyl acetate; the tails (feints) in the upper range, mainly long chain alcohols. These heads and tails are redistilled a second time. It is the central fraction, the heart (middle cut), that contains all the desirable volatile organic compounds from the original fermented wort, as well as alcohol and water.

The distillation process, while ‘fixing’ the desirable flavour compounds of fermentation, and adding some of its own, is mainly responsible for the body/weight of the spirit – depending on equipment and technique.

Harvesting, malting, mashing and distillation may be interpreted, for comedic effect, from a medieval drinking song as being ‘destructive’ processes worthy of Dante’s inferno, but that it leads to the absence of any terroir effect is clearly nonsense.

After all, wine making could be ridiculed as equally aggressive with its mechanical de-stalkers, pneumatic crushers, must concentrators, juice freezers, reverse-osmosis machines but no one is naive enough to claim terroir is missing in fine wine.

I am not evangelising that everyone should adopt a similar terroir approach to ours, that is clearly not practicable. What should be acknowledged, however, is that terroir does indeed exist in a spirit – if you choose to look for it.

I accept that for most producers it is simply not practicable, logistically, pragmatically or economically. But killing something will not allow you to claim it did not exist…