The story of Boby: mills, maltings and machine guns

Here, a self contained Boby malting plant was installed by Vickers in the early sixties but superceded before being mothballed in 2008. In 2015 Minch Malt agreed to resurrect the Boby Maltings for the Waterford Whisky project on condition it was used to its optimal capacity of 90 tons over two twin steeping tanks of 45 tons each.

By comparison with the malting taking place across the rest of the site it truly is a drop in the ocean. Just three truckloads – 100 tonnes of unmalted barley – at a time. It is that comparatively micro size that allows us complete control over the malting of barley from each farm, the ability to tweak the malting process to every individual terroir and allow it to express its character most fully.

Indeed the whole of our operation, from the size of harvest we require per farm, to the number of farms we distil from each year and the quantity of spirit we produce is dictated by the size of the Boby Plant.

Today we share the remarkable story of the Boby firm itself; its highs and lows, its journey from mills to mayors to machine guns and back again, its final demise and its continued existence through rare, small plants like ours.

It isn’t entirely clear precisely when or where Robert Boby was born. His obituary suggests “Standford” (likely Stanford) in Norfolk in August 1814, though a later census of Bury St Edmunds implies a birth year of 1816 somewhere in Suffolk. What is certain is that by the early 1840s he was living in Bury as an assistant Ironmonger, and later partner, of William Groom. Clearly an astute character, by 1843, still in his twenties, Robert had saved enough to buy the business from William.

It was in the 1850s that the seeds of Boby’s agricultural influence truly began to sprout, as the company began production of an Improved Corn Dressing and Winnowing machine based on a corn screen patented by local Chemist Thomas Cooper Bridgman. The machine was designed to separate corn from chaff, and did so so effectively that it won a gold medal at the Chelmsford Show in 1856. In its first year of production Boby and Bridgman sold 200 units. By 1887 the company had sold 13,000.

Boby’s influence on the world of grain agriculture, and its natural next step, brewing and distilling was profound. By 1862 the company was winning medals not only for screening and winnowing but, tellingly, for its Improved Wort Pump, sold to brewers. Edward Greene, founder of the now-monolithic Greene King brewery chain, established in Bury St Edmunds, was obviously impressed; in 1866 he held a dinner in Bury’s Theatre Royal to celebrate his newly-outfitted brewery, Westgate, whose screening and malting equipment had been built entirely by local hero Robert Boby. Indeed the dinner, which also featured Bury engineer George Cornish, was as much a celebration of Bury’s revival as a manufacturing town as it was the completion of a brewery. A revival that was in no small part down to Boby himself. This was the age in which pub and home brewing were largely being replaced by huge brewing and malting operations, and Boby’s innovations were central to that shift.

In 1881 a Boby roller mill was installed at Bruichladdich Distillery in Islay and as testament to its design and  build it is still in use 140 years later.  Strangman’s brewery on Waterford’s Grafton Quay installed the Porteus marque.

Robert Boby seems to have been the beating heart of Victorian Bury. Records speak of dinners, celebrations, festivities that the company held for its employees and the wider townsfolk. A councillor from 1860, he was elected mayor of Bury St Edmunds for 1883, his popularity with employees underlined by Councillor C Beard’s pronouncement that he “had never heard a man so highly spoken of by his workmen”.

Even a disastrous fire in 1877 couldn’t slow the company down, and again the townspeople of Bury turned out in numbers to save as much of the firm’s buildings as they could, despite heat so intense that the woodwork burned off engines standing away from the blaze in the yard. Several buildings were destroyed completely, but were replaced with new structures so advanced that they were still in place when the company closed down a century later.

In 1886 Robert Boby died and the company passed into the hands of his nephew, C.E. Mumford, who turned it into the publicly traded Robert Boby Limited and built a huge new foundry, Northgate, alongside the railway line.

The development of malting barley equipment was clearly central to the company by 1913, with their manufacture of the “Galland” malting drum a huge element in the brewing and distilling industry’s move away from the old, traditional malting floors of the past.

When war broke out, the manufacture of malting equipment was necessarily put on hold, as ironmongers were required to become munitions producers. Boby was sub-contracted to Vickers Sons and Maxim’s, most famous for their iconic Vickers Machine Gun. This was a particularly important role, since Britain’s stocks of machine guns were critically low compared to Germany’s stockpile, since the British army had previously considered it improper to deploy such a weapon in a theatre of war.

Unsurprisingly their new status as a significant munitions producer made Boby a target for German bombs themselves. But although the company had a very narrow escape when a bomb crashed through the ceiling and failed to explode, it managed to make it through the war relatively unscathed.

Indeed the most significant effect the war had on the Boby company was its enforced association with Vickers which, rather than waning following the armistice, remained official to such a degree that in 1927 Vickers bought the entire Boby Company. No longer solely pre-occupied with agricultural machinery, Boby’s manufacturing remit now covered brick making, construction and far more besides.

But malting remained an essential tenet of the company’s operations. In 1946 it outfitted the Greene King brewery with ultra-modern malting drums equipped with revolutionary (in every sense) arms which could turn the malting grain automatically. The era of men – and it was almost always men – turning the grain manually with shovels was all but at an end.

And it wan’t only breweries being outfitted with Boby equipment. Such was the firm’s reputation that in the 1960s Scottish malt distillers commissioned four Boby drum maltings in Morayshire and a fifth on Islay to service the whisky industry. Meanwhile, and particularly significantly to us, five more were commissioned to be built in southern Ireland. During this time continuous malting, whereby green barley was loaded into a machine and then extracted as malt at the end of the line, was developed, and once again Boby were at the forefront, in demand all over the world, from Canada to Scotland to Portugal.

It seems almost incredible, given this prosperity, that just a few short years later, in 1971, the iconic Boby works on Bury’s St Andrew’s Street were closed down. Vickers, a company orders of magnitude bigger than Boby, moved the Bury manufacturing to their central plant near Swindon, and dispensed with the Boby name, which had disappeared for good by 1973. Over the next decade the old factory buildings – once the biggest in the town – were sold off or demolished. By the early 1990s the site had largely been turned into a Waitrose. Today the last standing remnant of the Boby Company is a public service building in what used to be their Careers Office.

BUILDING OVER HISTORY: WAITROSE CONSTRUCTION ON THE FORMER BOBY SITE, 1992

The whisky industry, and its associated companies, are a litany of stories, many of which, like Boby, came to a somewhat sad and sudden end. But the engineering innovation that drove the company for nearly 150 years still lives on in our corner of Minch Maltings; the terroir project’s crucial individual treatment of each Single Farm Origin made possible by that once-great pioneering firm from Bury St Edmunds. 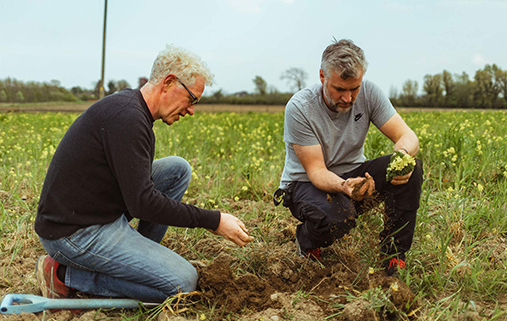