When you’re one of the first trio to grow biodynamic barley in Ireland… and you’ve seen biodynamic preparations restore your soil from the point of death to unprecedented vibrancy… and your brother’s farm is just over the hedge… well at some point he’s bound to give conversion serious thought.

Trevor Harris has been farming organically in Cooltrim, County Kildare, since the late 1990s. In 2015, still unhappy with the condition of his soil, he converted to biodynamics and hasn’t looked back. And in 2016, along with Alan Mooney and John McDonnell he became one of the first trio of Irish farmers to take up the challenge of growing biodynamic barley for single malt whisky distillation.

“I suppose education and a little bit of bravery and a few quid to invest in the big equipment,” is his response when asked about the challenges of converting. “I bought a whole host of books and got stuck into reading them. Then the fact that there were other people around who had a similar interest and were going down the same path at the same time, that was a huge help.”

What does ‘converting’ mean? To understand that, a brief summary of the differences between conventional, organic and biodynamic agriculture is useful.

Conventional agriculture includes the use – to varying degrees, depending on the farm – of chemical fertilisers, pesticides and fungicides. The majority of our food (and drink) is grown this way – hence ‘conventional’ – and it’s easy to understand why. Chemical aids increase potential yields severalfold.

Organic agriculture, once ubiquitous in Ireland, now constituting around 2% of the country’s total, aims to grow crops and produce without this chemical assistance. Through such means as crop rotation and the use of cover crops like clover to naturally aid a soil’s nitrogen balance, the intention is to maintain a healthy soil in terms of its biology, chemistry and physical structure where the overuse of chemicals can ultimately reduce soil nutrients and effectively exhaust the land.

Converting to Organic agriculture is a serious business. For one thing, the term Organic is regulated; one has to achieve certification, to prove the absence of chemicals from the land. Nor do chemicals disappear simply when one stops using them. Ross Jackson in County Tipperary cites a two year period of red clover and grass ‘fixing’ his land before conversion had really happened. (Though of course re-conversion to chemical agriculture is a matter of a single spray).

If organics is defined by what you don’t do; no chemical aids, pesticides and so on; biodynamics is more a case of what you do. Like Organics, the use of chemical sprays is renounced, but in this instance, in addition to the rotations and the natural pest managements, a complicated, labour intensive and very time-specific series of eight soil preparations is deployed, aiming to ‘supercharge’ the soil with vibrancy, life and nutrients. You can read about it in far more detail here.

As Trevor suggests, above, conversion to biodynamic agriculture is really a matter of two points. Firstly, one must have already converted to organic agriculture; the land must be free of agrochemicals. Secondly there is the more complicated business of education; actually learning the calendar – the particular times at which the preparations are made and laid, not to mention the incredibly detailed manner in which these preparations are produced. (Although some biodynamic growers buy their preparations in to save time, Trevor is the sort of all-in chap who not only makes them himself, but now contract-sprays his preparations on other farms as well.)

To give you an idea of just one of these eight preps, here’s Trevor’s breakdown of the manufacture of 500P, the famous Prepared Horn Manure:

“There’s a very specific way to make it,” he says. “In the autumntime you gather up manure from a lactating cow and the same day you put it into a cow horn and bury it in the ground. You have to pick a particular day to do it – you won’t just bury one horn, you’ll fill and bury a number of them. And you leave them there over winter and then in the springtime, after all the soil forces and the cosmic forces have had time to act on those horns, you dig them up, extract the manure and store it in a special vessel inside a peat-lined box to allow it to mature. It’s a bit like a fine wine! It doesn’t come out of the ground necessarily ready – you put it into storage for a period of time; it could take a year to mature properly. Whilst it’s in storage you’re monitoring it and making sure that it doesn’t dry out. So it’s quite a specialised process. Then after it’s matured to a certain stage you add the compost preps to it, store it for another period of time and monitor it, and then you have your Prepared Horn Manure. 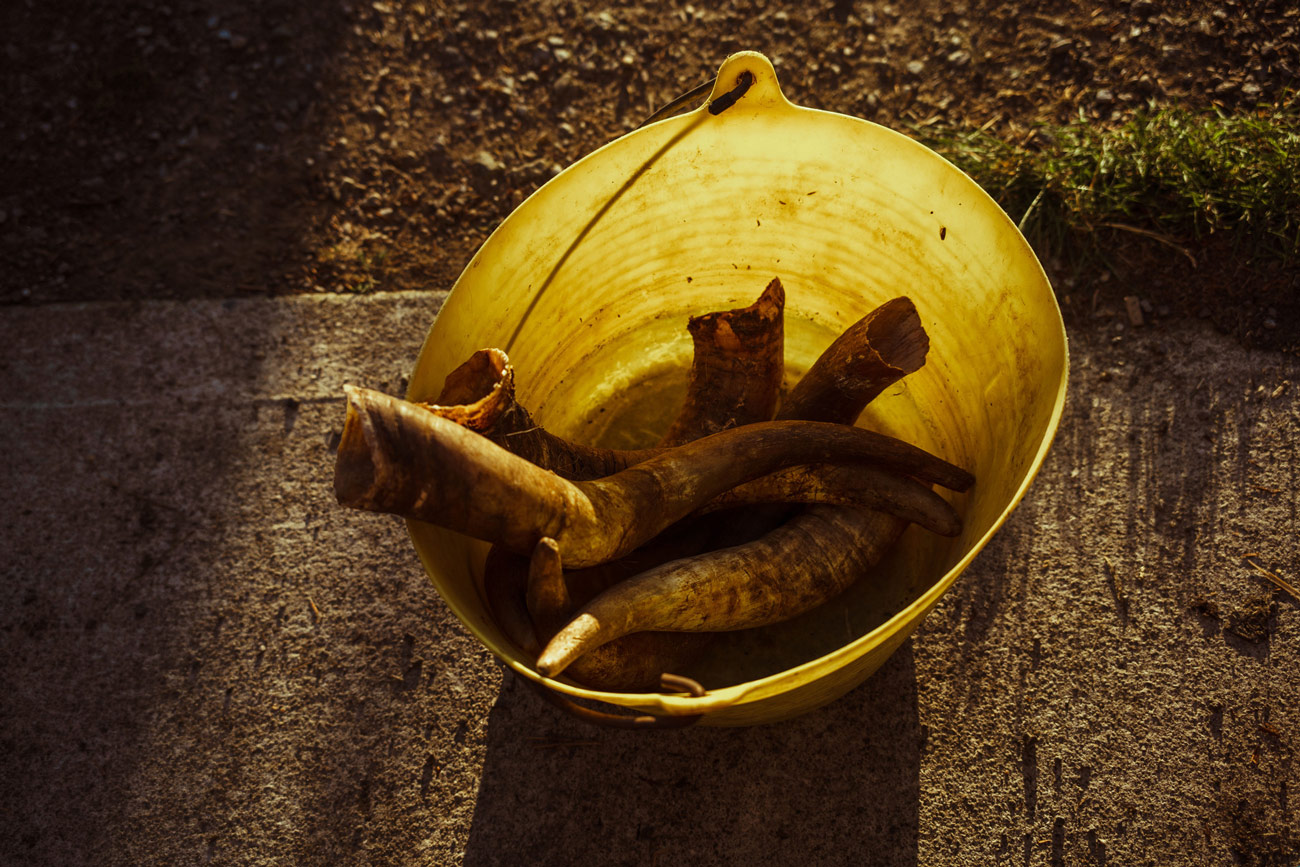 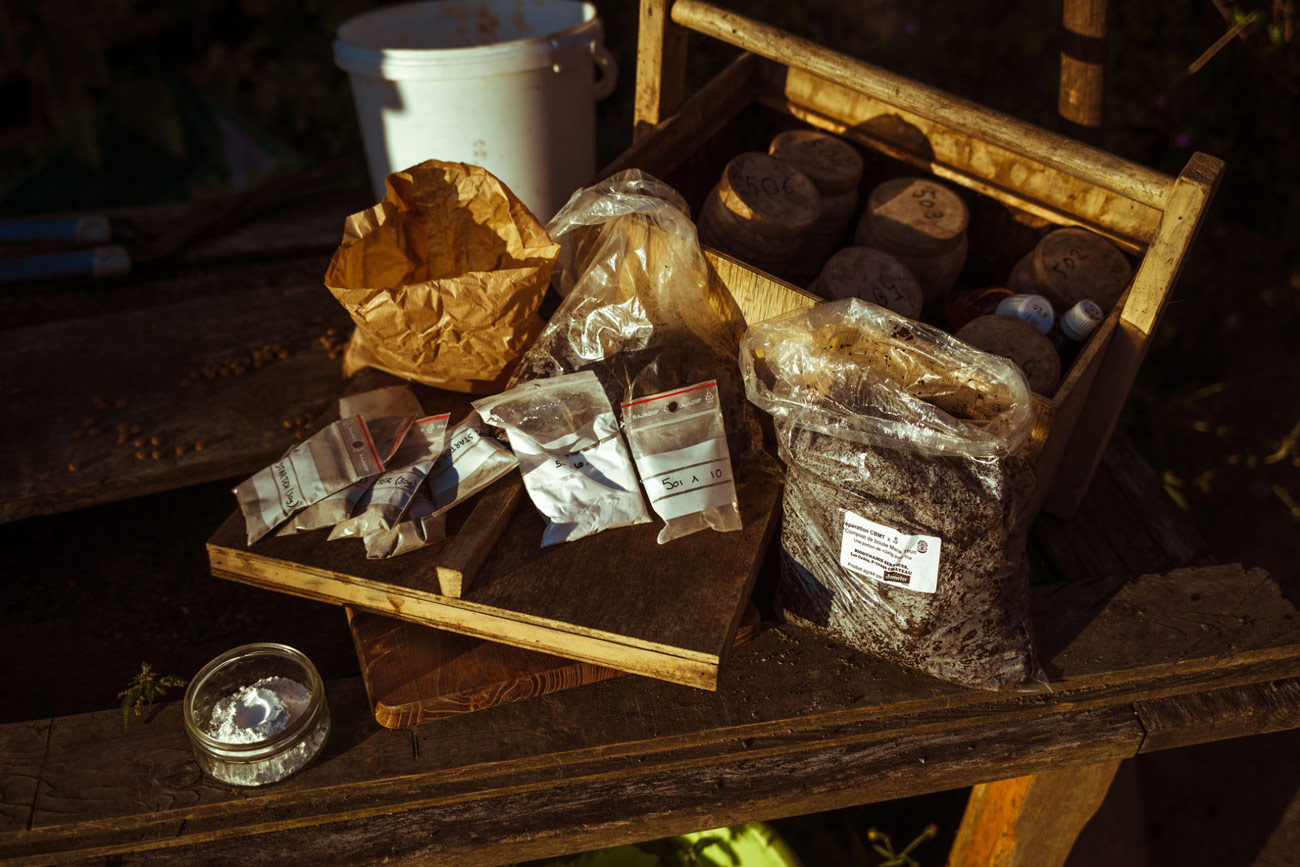 That’s one prep. There are seven more just as complicated. If you didn’t see results, there simply would be no argument for such a painstaking approach.

But the difference that biodynamic agriculture has made to Trevor’s farm is immense. Soil structure and biology have improved immeasureably; Trevor speaks of fuller-flavoured crops, of improvements in roots and photosynthesis. He even cites an unusual subterranean barometer of biodynamic success:

“When I started down the journey of applying biodynamic preps one of the key points that I wasn’t happy with was the worm population. It wasn’t that they weren’t there, it was how they looked – unhealthy – this sort of green look. And now, with the structure much improved in the soil, there’s a huge population and they’re all a beautiful healthy pink.” 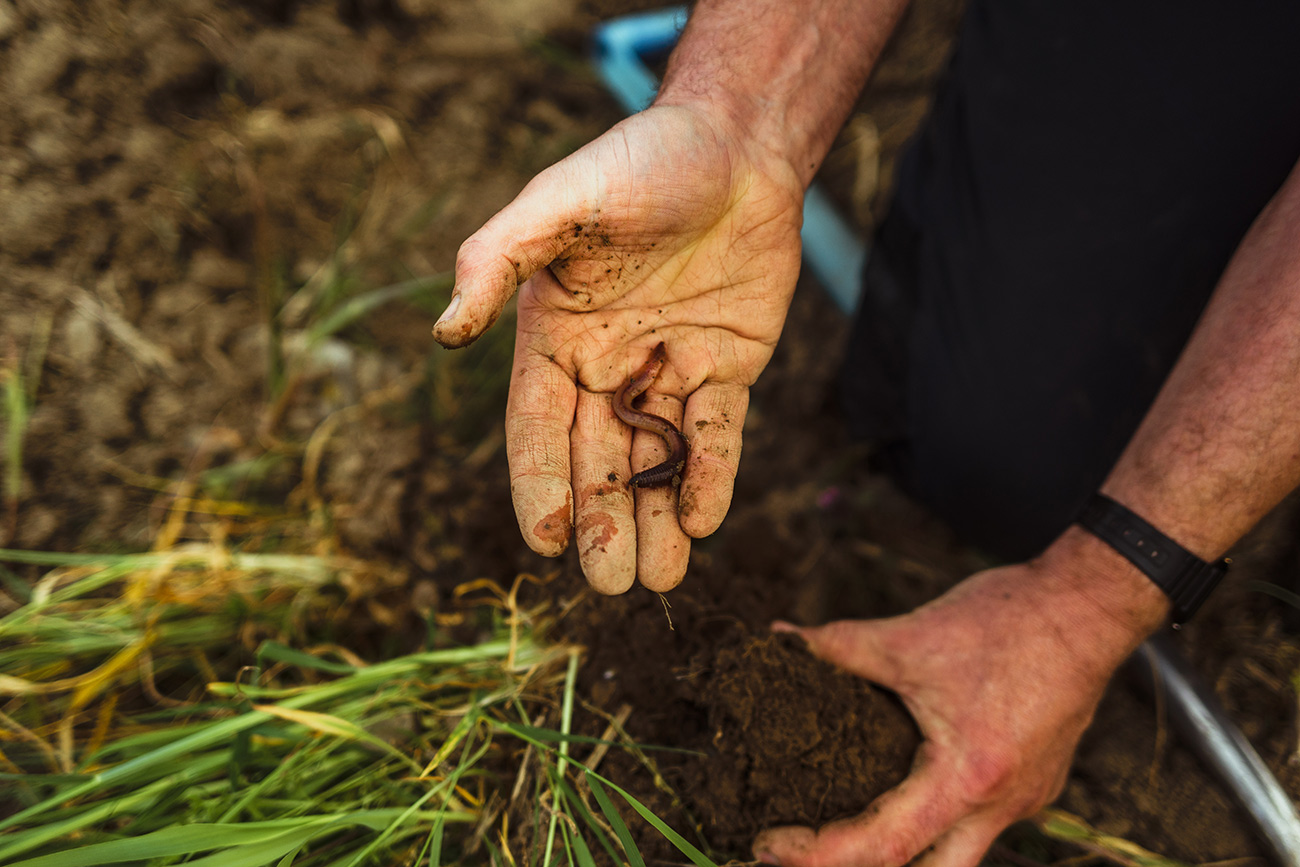 Happy soil, happy worms… and, not surprisingly, happy birds by extension. The thick hedges that fringe and dissect the farm are now heavy with birdsong; it’s among the first things we notice whenever we pay a visit.

“The amount of people who come here and say ‘this is a beautiful place, this is a really happy field’ is amazing”, says Trevor.

Of course the benefits are not simply to the soil. The spirit we distil from Trevor’s biodynamic barley offers a profound increase in flavour compared to barley grown conventionally.

In the words of our Terroir Specialist, Angelita: “Biodynamic spirit seems to have much more depth of flavour going on. There’s a lot of complexity. It’s almost like the attributes are speaking much louder. So a conventional farm on the very same soil, on the range of zero to fifteen on our sensory analysis scale, might have a score of seven for floral notes, maybe organic will fetch a nine, but the biodynamic would get an eleven. So it seems to be a stronger note than in the conventional.”

“Trevor was getting into the biodynamics so I was watching that. So I probably felt a bit braver,” he says. “From watching Trevor’s farm and trialling biodynamics on my own I see it as the next step to improve things; to improve soil function, grow healthier plants. It’s not about massive yields or anything like that – but it’s about healthy crops that grow consistently every year.” 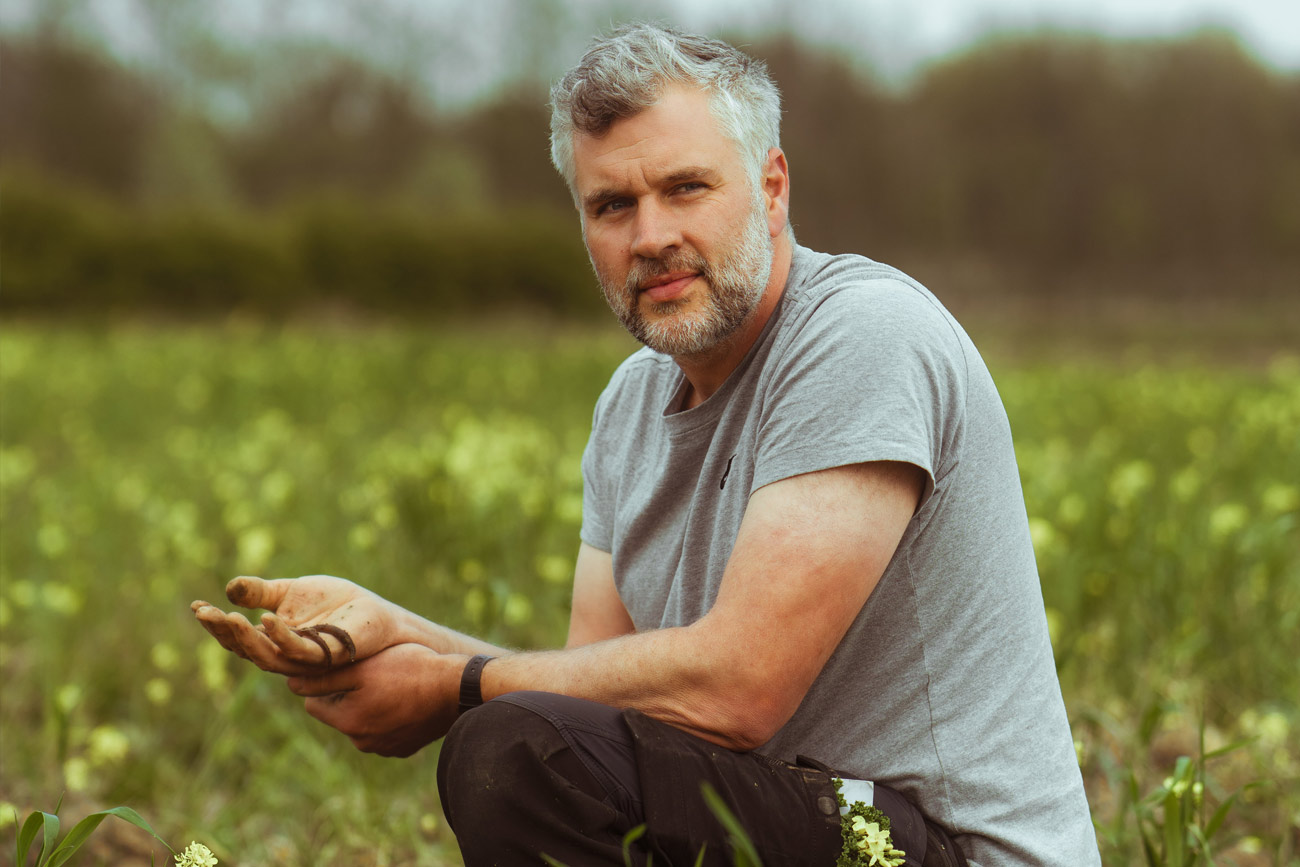 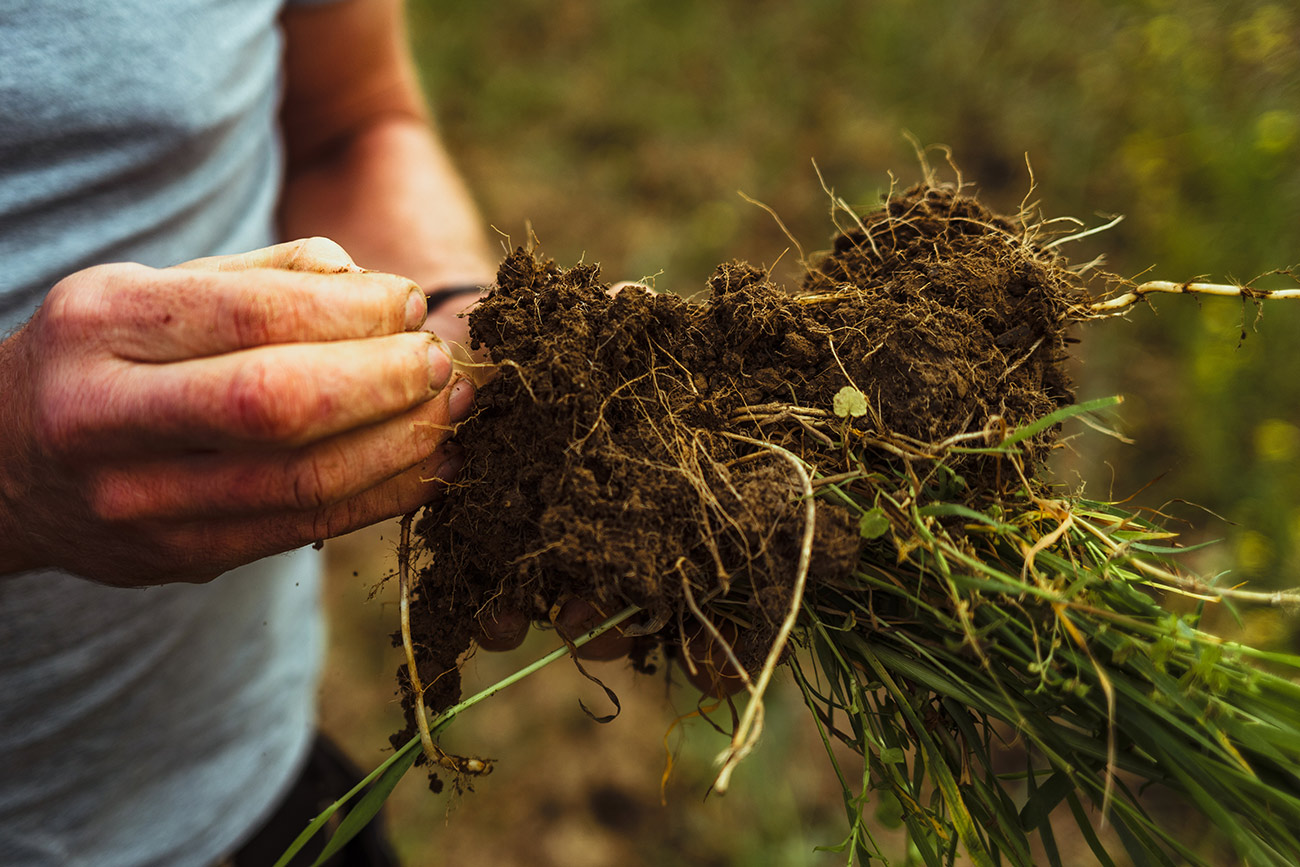 “The first time I sprayed one of the biodynamic preps it was on one of my poorer-performing fields,” says Graham. “And it performed much better that year. It was the stiffest soil, probably hadn’t been looked after well enough, but it’s improved a lot already with a small amount of biodynamic preps, which certainly made me sit up. Seeing the change in the soil and being able to affect the plants growing in the season’s window is what I’m looking to explore.”

Unquestionably conversion to biodynamics is an act of bravery. Without the crutch of chemical fertilisers and pesticides to lean on, yields are inevitably far lower than those on conventional farms. Perhaps a tonne per acre for the biodynamic farmer compared to four for conventional.

Nor is it a simple thing to learn, as Trevor’s experience attests. Detailed, time-consuming, heavily involved – it’s all in or nothing.

But to those interested in flavour above anything else, those who wish to know just how intense, complex and profound distilled barley can be, these esoteric old ways hold an irreplicable key. Good luck to Graham as he follows in his brother’s biodynamic footsteps. 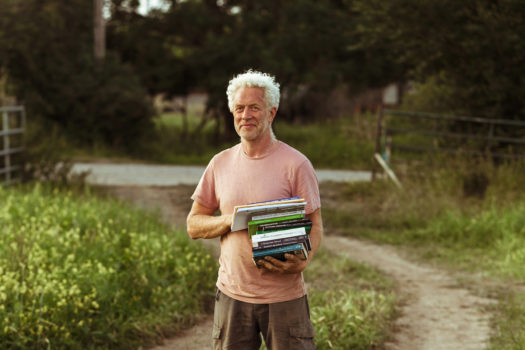 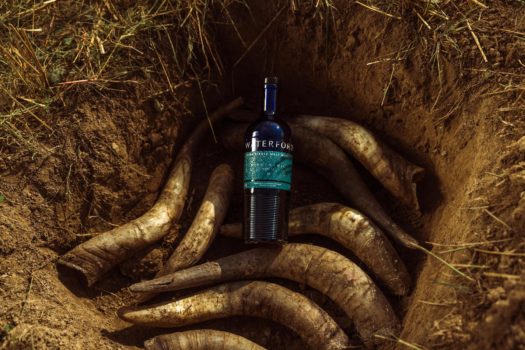 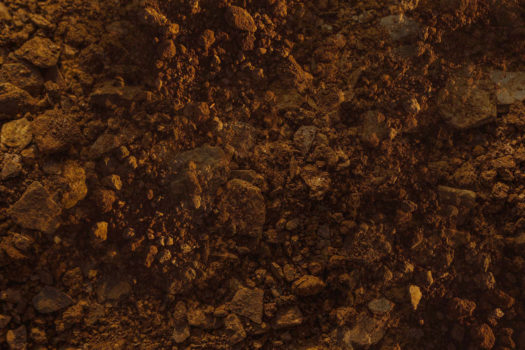 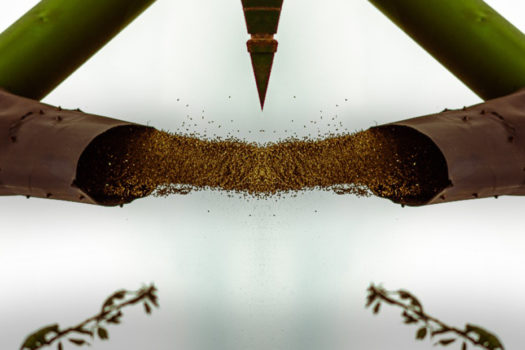