Reaching for the sun cream again there has been a massive amount of progress over the last 7 days. Most of those final acres have been cut with fields cleared of trailers and straw promptly before the end of August. An unusually dense harvest in the Cathedral and Chapel at Daltons having stored 34 batches delivered and dried in full already. The harvest season will however spill into September as we wait on the completion of the multi farm bio and organic batches, our Ulster/Munster batch and as the fight for lorries continues, we slowly empty the remaining batches hidden in growers’ sheds. With only a handful of growers left to contact we are on the homestretch while the national harvest is reported to be 75% complete going by recent Teagasc figures. 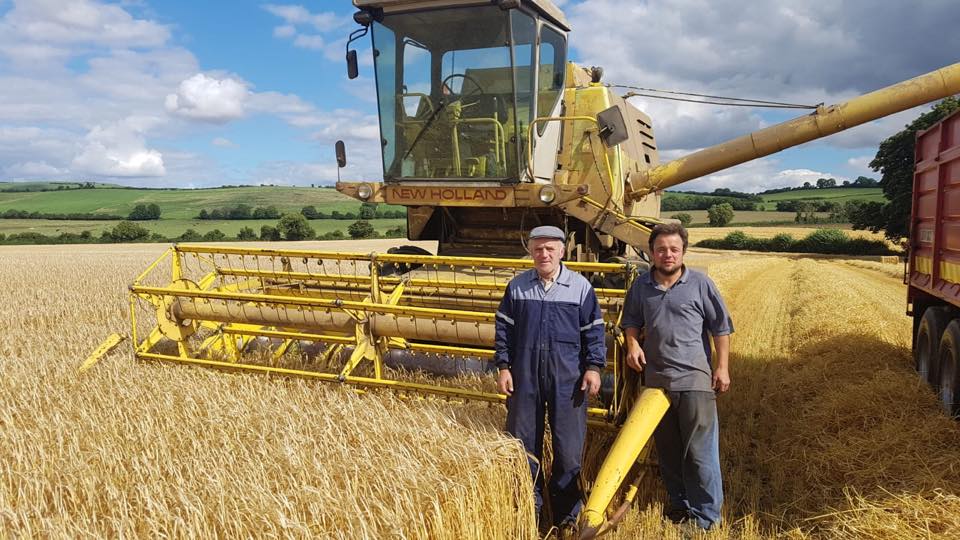 Quality has never been so consistent throughout, even after changeable weather, the standard was maintained and now the finish is very much insight. Unlike last year, the harvest team was met with derogation after derogation as each batch disappointedly fell out of spec and we had to make allowances. Not only would this have an effect on growers, but it also led to a false start for our production team managed by Head Brewer Neil. Gladly this year represented somewhat of a homecoming for our historical growers. Bays filled with the familiar faces and townlands that we have paid homage to since our beginning. Many of which have tried to deliver year-in and year-out, with some success and some failures, 2021 has to be the year of the comeback! 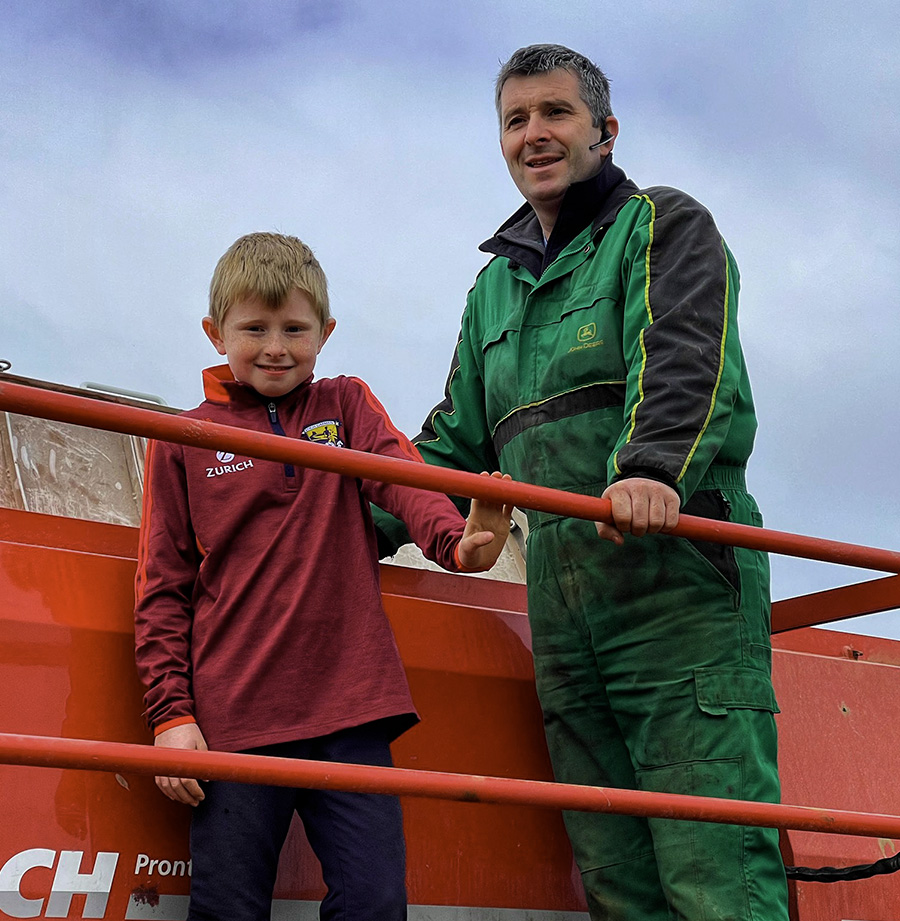 The Alvan Dryer worked through the Irish Goldthorpe yesterday and has begun to preserve the start of the multi farm organic batch while we wait for the remaining farms to deliver from the foothills of the Wicklow Mountains. Thankfully we received our Galway batch from Brian Kenny of Meadow Lodge as we unfortunately lost out on Connacht in 2020. The struggle is always real in the West of Ireland not unlike the battle Seamus Duggan faces annually with Irish Goldthorpe when he cut and delivered earlier this week. Success is seen from field to field but none like the achievement of our biodynamic grower, Alan Mooney. All four of our biodynamic growers received the challenge to grow Hunter, a barley variety bred in the 1950’s, known for its scavenging roots thought to benefit their enterprise. It has been a true success so far as the results are in from our first delivery that we have documented on Instagram highlights today. To complete the batch, we wait in hope for our usual harvest back makers to cut and delivery within spec. 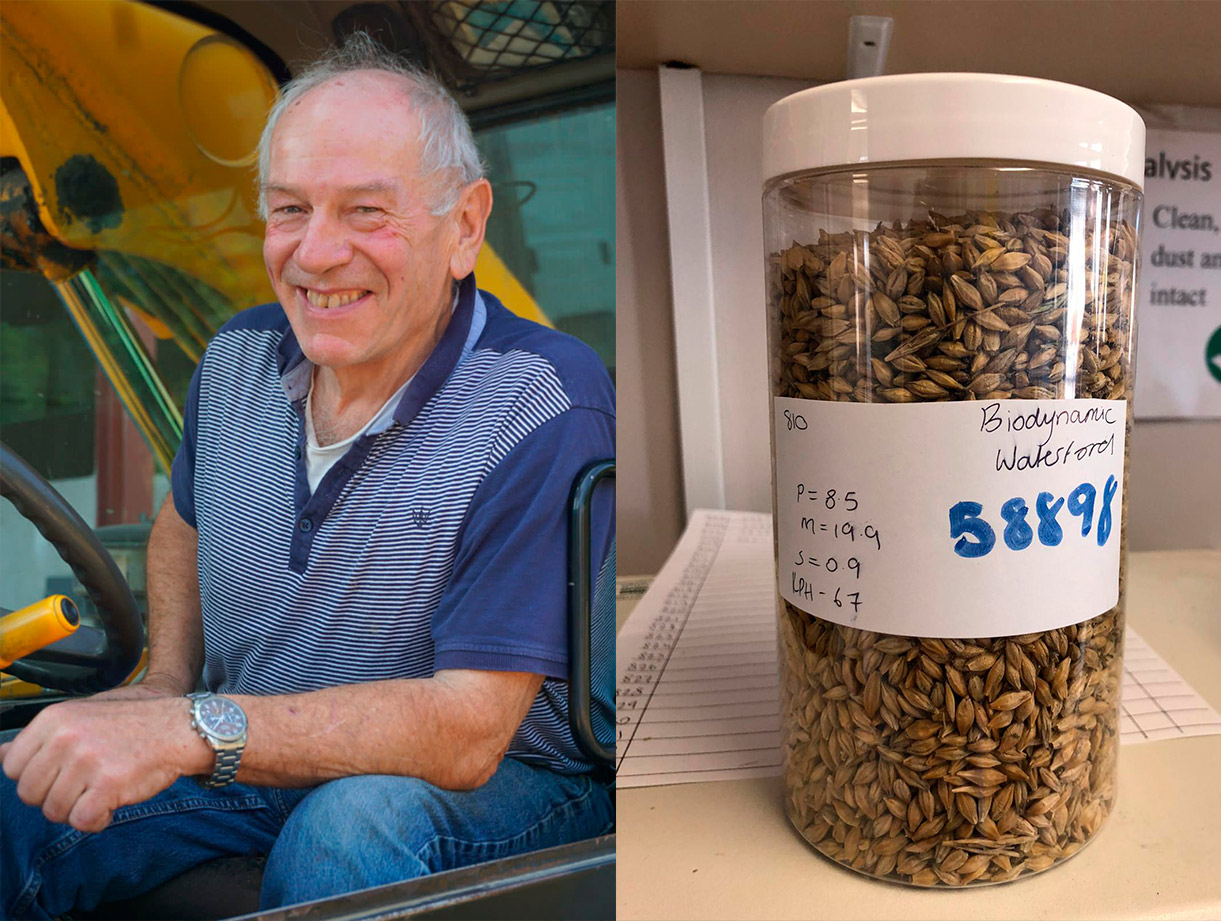 From eleven counties across Ireland, 2021 will be the most diverse harvest to be malted and distilled so far. With the odds strongly in our favour this harvest will be known as the most successful yet for all stakeholders involved.

All roads lead to Daltons

Above combines this week, moody skies lay heavy as they battered their way acre by acre through the workload. Surprisingly the variable weather over the last 7 days has not slowed momentum as growers continue cutting and delivering batches. Sampling at the weighbridge tells of plum and heavy grains testament to the ideal growing season. Unlike last year where grains weren’t making the weights, 2021 couldn’t be any more opposite with KPH’s (kgs per hectolitre) north of 65 being commonplace across our batches. Daltons have never seen distilling quality this consistent before as we continue to race ahead of previous harvests.

Almighty work has been completed in a week of cool and dull conditions, with higher moistures in canopies not helped by poor drying conditions. Earlier in the week high moistures either side of 20% made cutting and storing trickier by slowing down progress for all. Growers play the waiting game before starting to cut meanwhile the drier operator in Daltons has to double dry batches slowing him down to one batch a day while he peaked at three batches when moistures were sub 15%. After coming off the field at 19% the Jackson batch was last to be dried and put to bed before being call for malting in 2022. 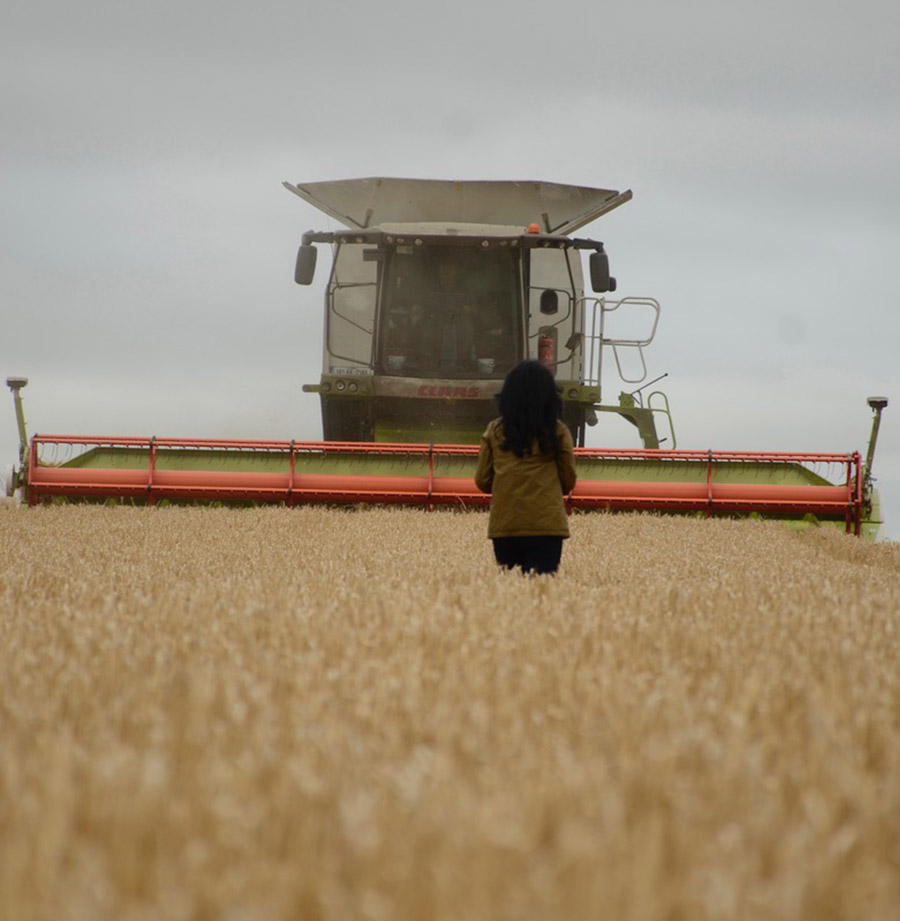 Handling the yards heap management outside The Cathedral & Chapel this year has been made easier as Dalton’s lorries collect batches in full once completed on farm. This week we have made serious headway with 25 batches delivered, 9 more than last week and if quality remains superior, we may start to consider buying surplus batches. Looking at progress beyond the intake sheet we have a lot of our 2021 conventional barley secured on the ground and it’s only a matter of cutting those final acres before calling for collection. 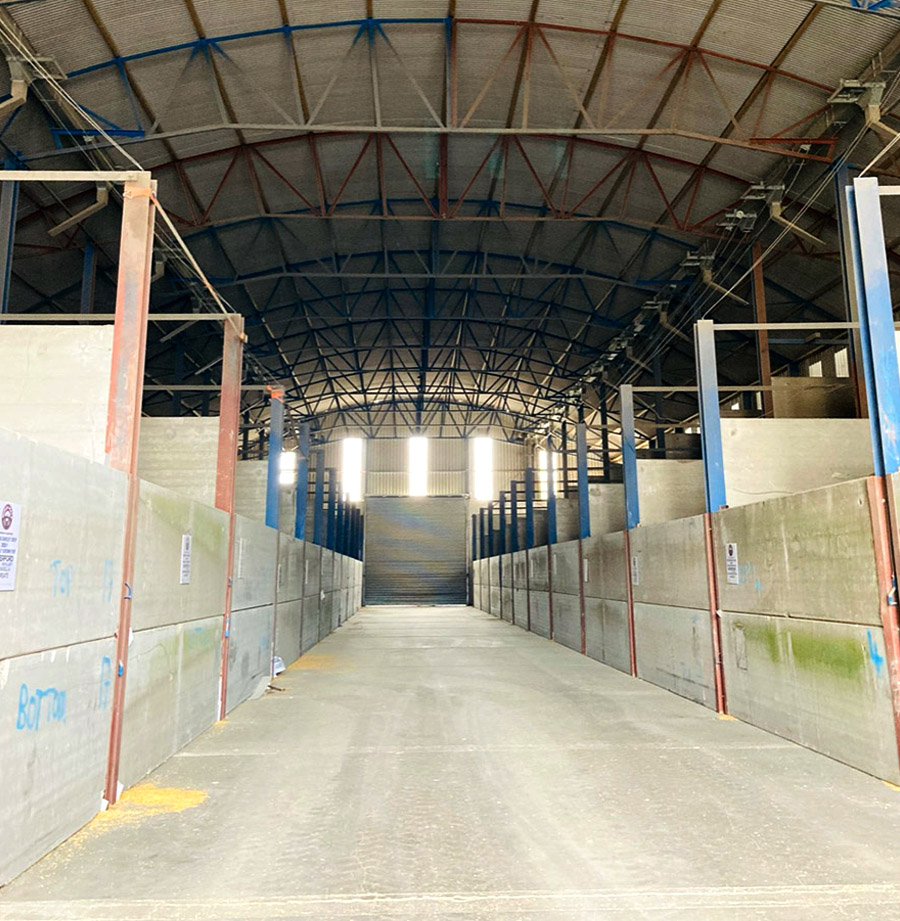 Braving it out our organic growers assigned to single batches, have vast lands of >80acres promised to our cause, began appearing in fields this week. Yet to take the plunge the famed Gavin Tully, waits for his chance this weekend when he will cut his very first organic batch solely from Clonhenritte, Co. Wexford. His comrades of mixed batch days will follow suit shortly to fill their commitments, at lesser acres, being equal parts of a multi farm organic batch. Later sown barley on the outskirts of the growing region have yet to be sampled in Cork, Galway and Donegal with some talk of breakdown within the canopy, we still hope for above average quality beating previous trends.

The alt barley division is expanding slowly with years of seed saving paying off today as we witness the harvest of our first full batch of Old Irish – the landrace. Denis Dalton has been looking after this ancient variety outside Kilkenny where we caught up with him on Instagram stories to see how it has turned out. Rewarded with a dram of Pique-Nique for his efforts, he assured us “it tastes like nothing we’ve done before!”. 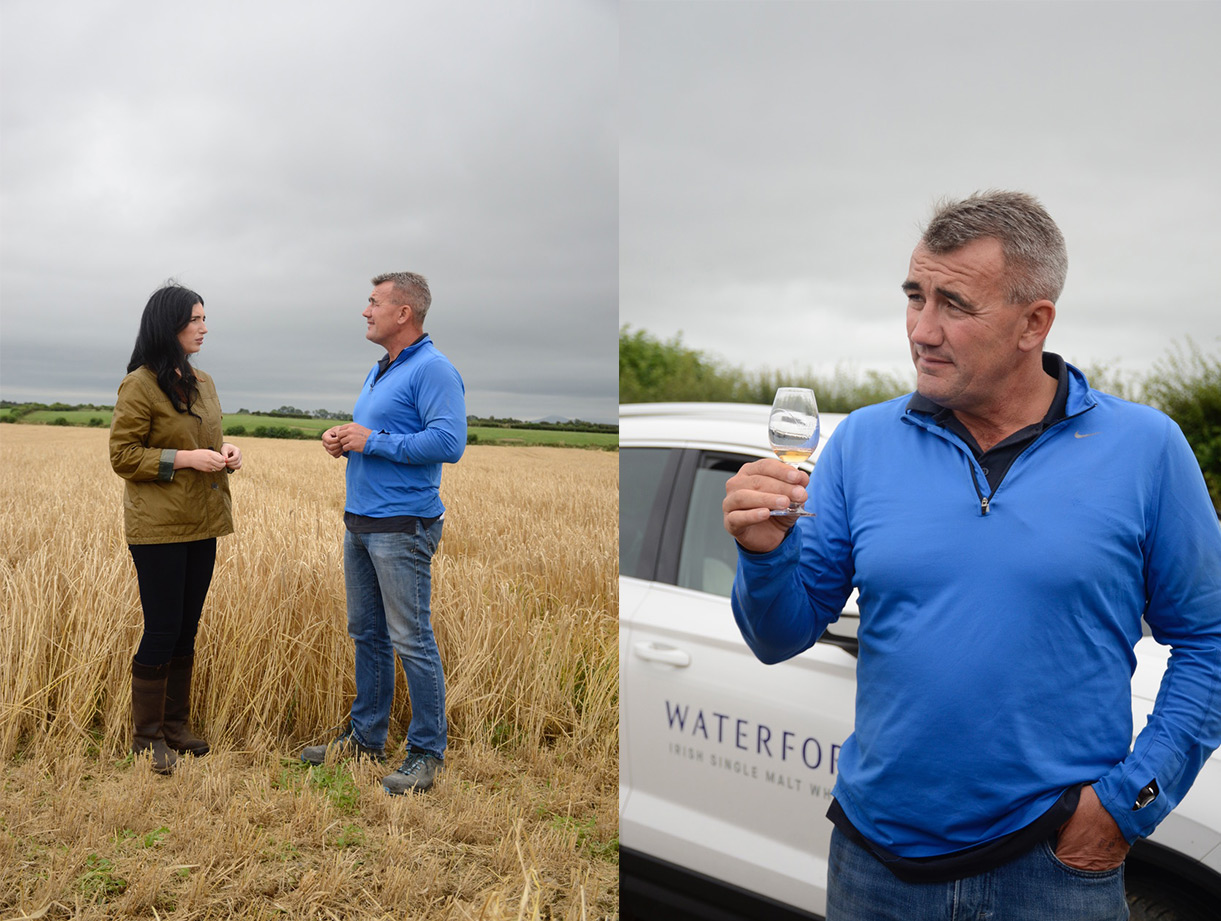 As the field work scramble slows down next week; we shall take you inside Daltons, our custom-built storage facility, for a complete insight into this humble enabler.

“Take rest; a field that has rested gives a bountiful crop.” – Ovid

Up until yesterday evening the page remained somewhat blank. Cutting came to a halt after wintery showers last Thursday evening abruptly stopped our treasure hunt. Isolated showers across the country for seven days followed until yesterday when we got adequate drying weather in the a.m. to chance cutting in the p.m. Although the broken weather was annoying for most, crops are still no more than ripe today. Results just in show that there has been no fallout in quality compared to the havoc that Storm Ellen caused in Harvest 2020. With crops still standing well the wind has done some pushing in dense corners, yet the fear of significant brackling, lodging and pre germination would be a premature scare with long cutting days ahead of us next week going by our friends in the met office.

Unlike last week, cutting is being tempted nationwide as the time is nigh for most spring barley crops. With sixteen batches secured in the Cathedral, four more than last week, the Ashmores of Blackcastle have been the latest to be conveyed from the Alvan Dryer. Moistures have gone back to the familiar levels of the late teens unlike the heat wave lows we have seen at the beginning of the harvest. Our most recent batches gave rise to protein levels, with averages increasing to the mid 8’s, such however will not startle our production team – this being a year of lows. 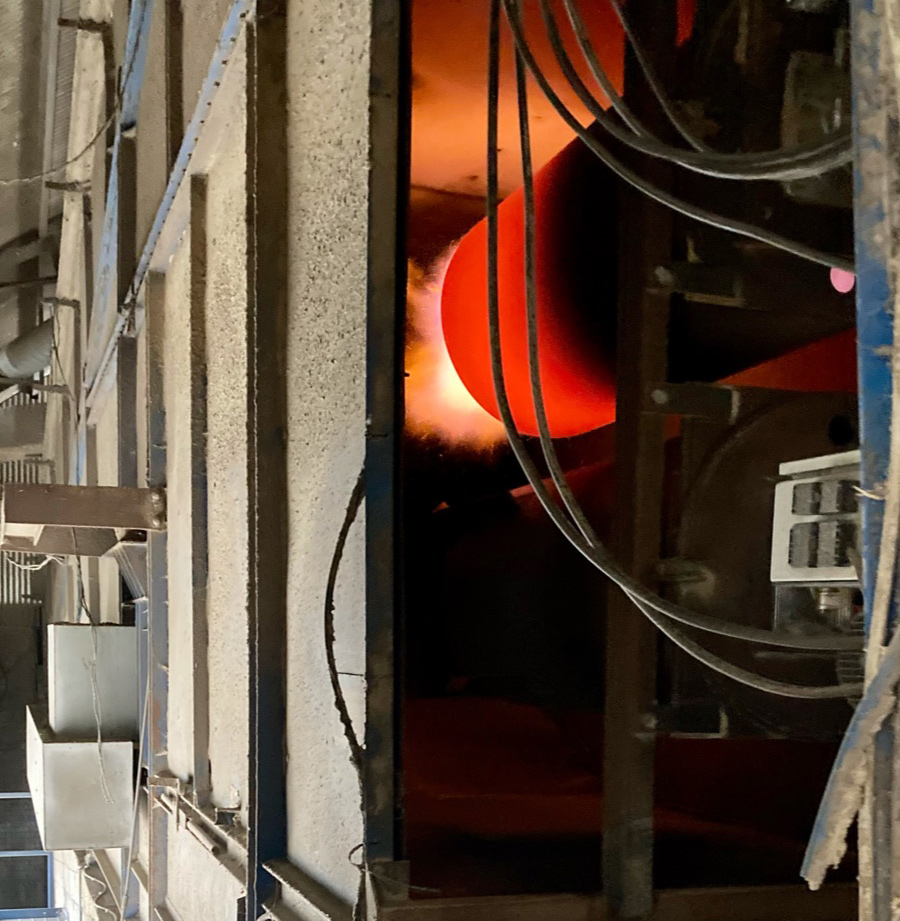 From Broomlands in Wexford to The Rookery in North Wicklow barley is being knocked before some mixy weather hits by nightfall. Pat & Denis Booth are first out of the arcadian army, working on an out farm to start with and heading for heavier ground next week. Like this many still have time to wait on heavier, later worked spring soils. 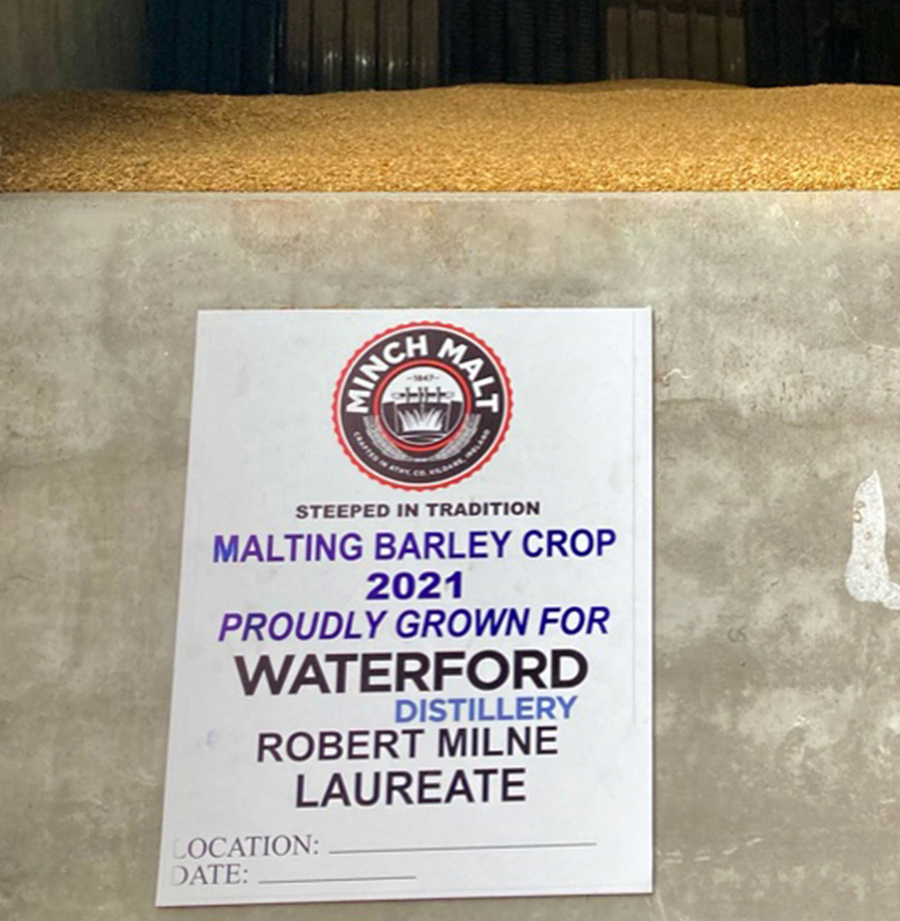 Daltons collect full batches at steady pace while Jim Druhan, our new intake manager mans the testing and drying of incoming batches. Jim, a retired Dept of Agriculture foreseer of seed quality, is a trusted candidate with decades of experience in grain quality and sampling, is welcomed to our extended Minch Malt team. As Jim maps out his next logistical move not many combines lie silent today and we expect to be in the depths of harvest mayhem come early next week. 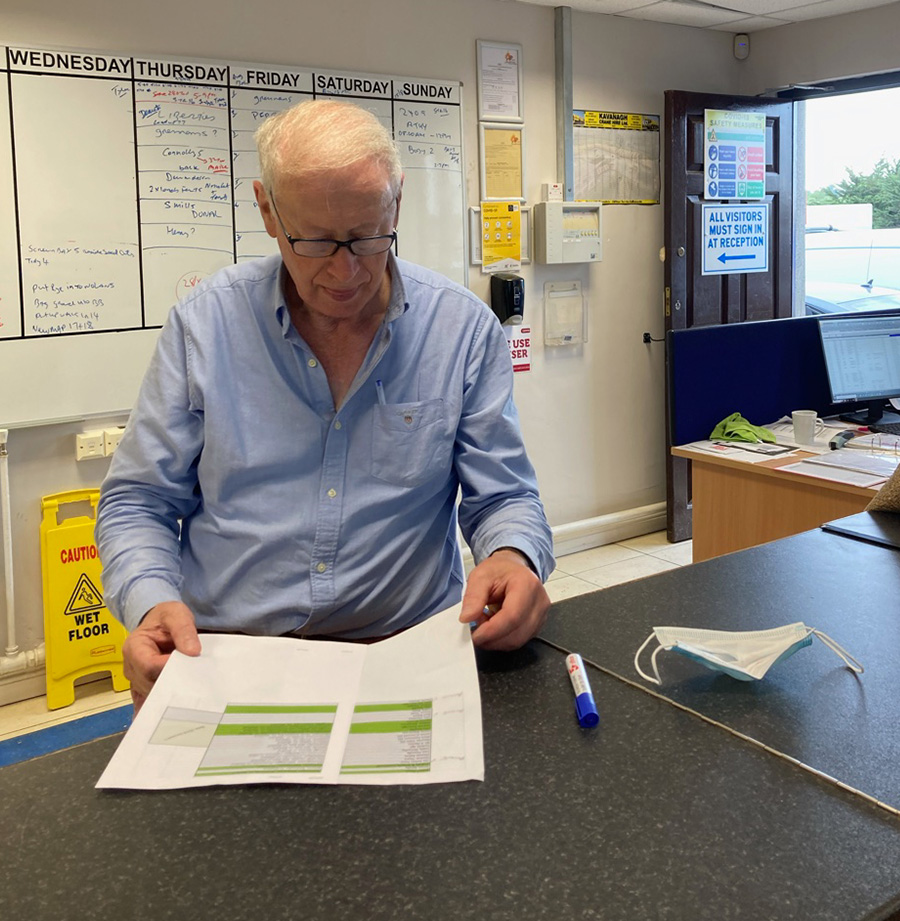 After having what seems like a well-deserved heatwave our growers have begun pulling the combines out for our seventh harvest. From mid-July we’ve seen nothing but high temperatures with a 13-year temperature record being smashed by a sizzling 30.8°C north of our main growing area. The growing season remained steady from sowing this year with no huge tolls along the way like the Mid-Summer Update editorial has documented. Even though the scorching highs created some fear towards the end; grain fill was elevated during the lengthy days of 15hrs+ sunshine recorded in North Wexford.

With sharpened combine knives the nine autumn sown batches were knocked and delivered in full by the 3rd of August. Some newly bred winter varieties amongst these batches will lead to a new array of flavor’s for the production team to assemble. Yields are high but less than anticipated by some excitable growers, nonetheless overall quality led to relief as acceptance was never as positive. Proteins ranged from 8’s to 9’s and we began to see some 7’s as we accepted the first 3 spring sown batches delivered later this week. 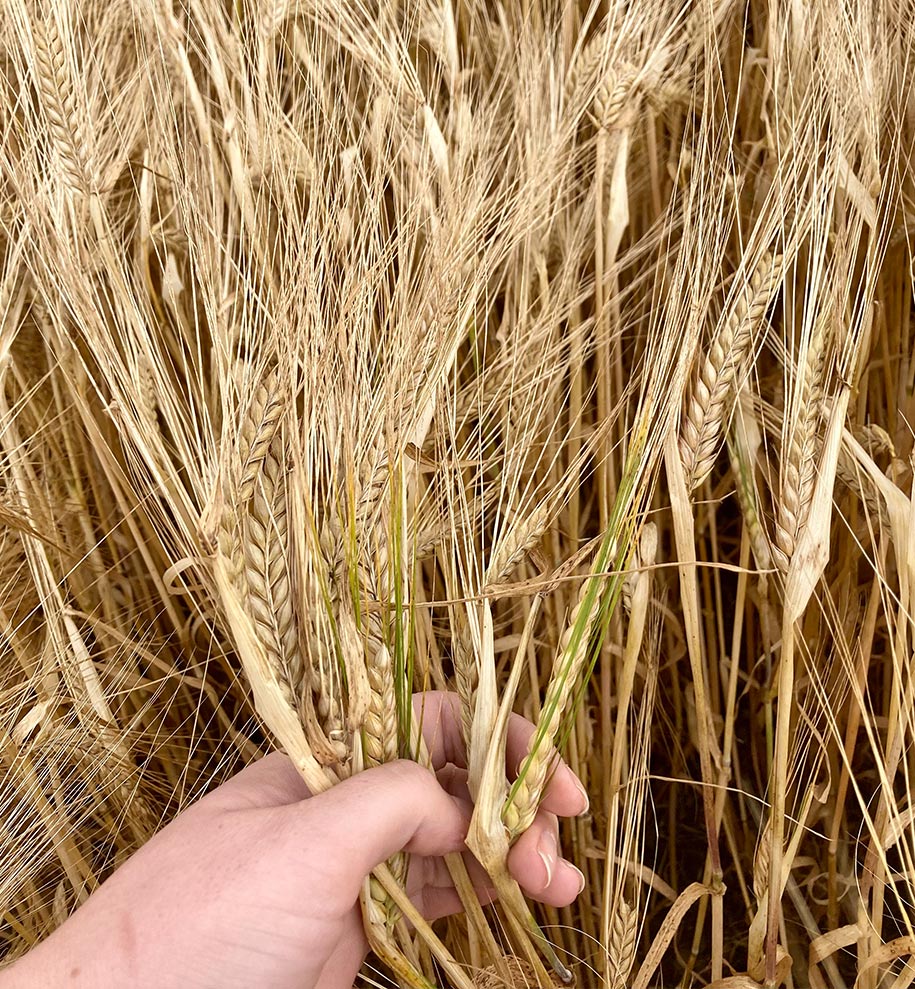 As they stand, crops look extremely uniform compared to Harvest 2020. Ripening has slowed down thankfully as we see the return of low pressure and Atlantic westerlies preventing grains burning in to a starchless state. We have to now urge growers not to venture into crops until ripe as we’ve seen a few rushed decisions on our travels this week. Future forecasts look like they will help slow down the harvest itch, but I would hope to see more dry spells coming our way!

Our lightest soils have gotten in before the burst with the usual suspects; Ballykilcavan, Ratheadon & Hook Head with the harvest starting to slowly creep northwards, we’ve seen fields being opened in Ballycarney, Co. Wexford, the heart of the model county on the banks of the River Slaney. Some batches started but yet to be completed lie in yards with major work ahead. Others have a patient wait of 10-12 days before considering sampling.

While cutting abruptly stopped yesterday nationally after wintery showers, a smaller microclimate stalled the Kehoe’s of Lacken earlier on Tuesday evening. A thick fog graced their land leading to increased moisture levels in the canopy and put a stop to the rush of trailers leaving Francis & Philips busy yard. The early start to the harvest will give growers extra time to focus on their spring crops as the winter crop is completed and weather wobbles at this stage cause little threat. Expectations remain extremely high at the foundations of what could be a bumper harvest. 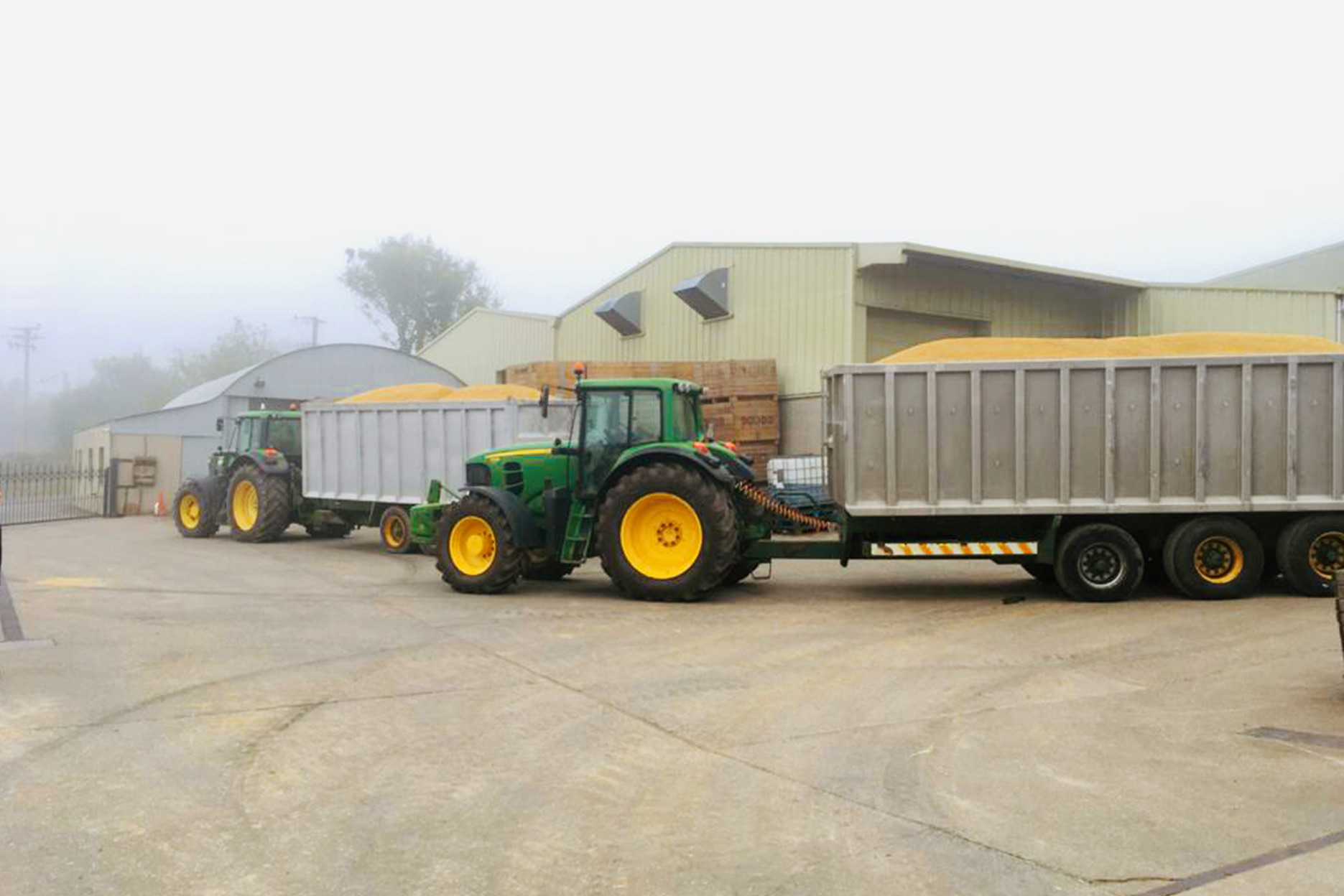 Keep an eye on the twitter machine for daily updates! 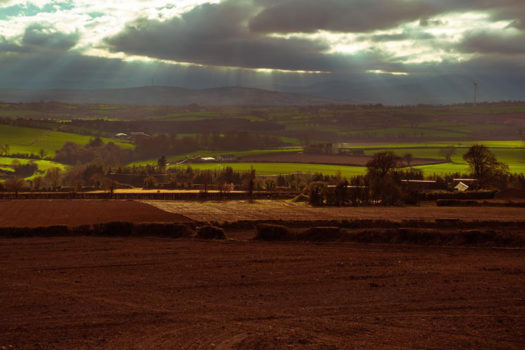 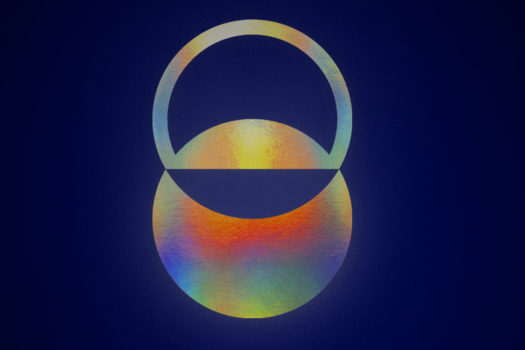 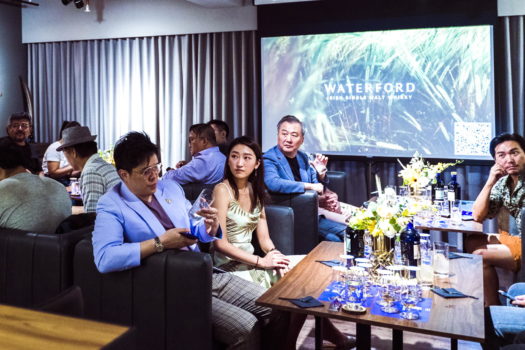 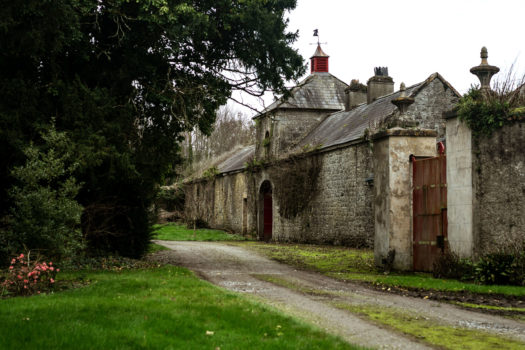